I used to adore cooking, way back when my husband was just my boyfriend. The process fascinated me, and because I'm a bit of a purist, every night I'd happily make things the correct way, using the right ingredients. Restaurant dining was our passion, and we'd happily drop way too much money on a meal in a michelin star joint, or be there in the opening week when another hot spot opened up in London. Food and wine - I used to read about it, research it, do courses on it, plan travel arrangements based on it. My particular fascination was South East Asian food.

Then we got married, moved countries and built a house, and we more or less stopped going to restaurants and I became more interested in spending money on furniture. Then we had babies, and it suprised me to find that the spicy and exotic kind of things I wanted to cook was not the kind of thing they wanted to eat. Good Sydney restaurants were something we could splurge on only a few times a year, and sometimes the logistics and guilt associated with childcare arrangements outweighed the pleasure of going out at all.

After a few years of having my culinary efforts rejected night after night by the palates of the under fives, I came to view the evening meal as a horrible chore, one that only produced unnecessary washing up, and very little by way of appreciation. So I kind of abandoned my own food preferences, and just made what they'd eat, and what was easy, and my love of cooking and food stagnated into a distant memory of what seemed like someone else's life.

But now that they're older, and a lifetime of exposure to good tucker has led them to have relatively educated palates, I'm kind of drifting back into cooking.

So, in the absence of any knitting progress, let me share with you one of my kitchen adventures. There is a very cheap and cheerful studenty Asian restaurant here in Wollongong, called Chef's Choice. I'd thouroughly recommend it to any visitor looking for a cheap and decent Asian meal, complete with free jasmine tea from an airpot.

When I go there, I usually have Hainanese Chicken Rice. I remember getting all excited when Po made it on Masterchef, because by complete co-incidence I had bought it for dinner that very night. Last Saturday night I had a go at making it, using a mash up of Po's recipe from the Masterchef website, and the sbs food recipe here.

I got all the ingredients out. 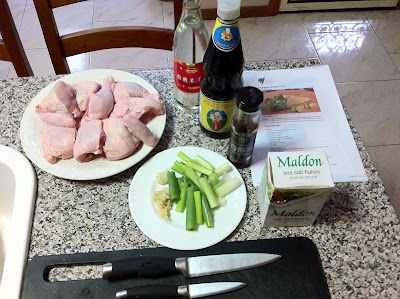 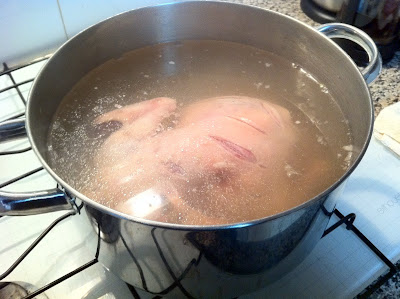 The fat from the chicken skin is used to coat the rice in a pan, and then it is cooked in the stock. The local asian grocer that seems to have been bought by an indian family since last time I was there, and the rice selection was completely different. This par-boiled rice is something I haven't seen in there before, it had been hand poured into plastic bags with a label stuck on. It was a little strange, but worked really well, the grains were long and separated perfectly. But they had a completely different texture - almost like a risoni pasta. It reminded me of the old rice a riso we used to get when we were kids, and the purist in me was not impressed. 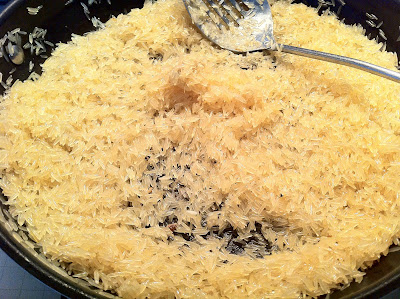 The eating part of the chicken is poached in aromatic acidulated water. Plenty of ginger, which is my favourite spice. 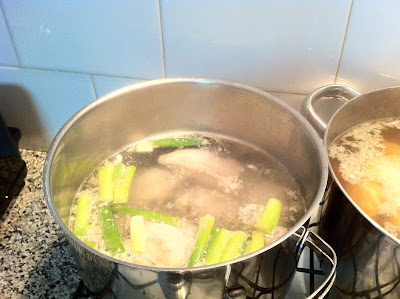 It was about this time that I set fire to the recipe by accident, so there was a bit of excitement when I had to put out a little fire in the sink! 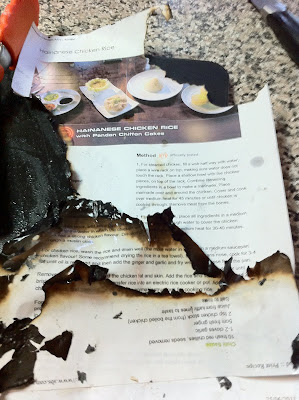 The dipping sauce is full of ginger and garlic, and is so yummy Adriano Zumbo should make a macaron flavoured with it. Mine didn't turn out quite as perfect as the one at the restaurant though - and to me it is the best part.

By now it felt like hours had past, and I was pretty over the whole freaking thing. My parents rang and asked if the kids wanted to go to their house for a bonfire, sausage sizzle and marshmallow toasting - and no amount of hainanese chicken rice coaxing would talk them out of it.

So it ended up being a meal to go. 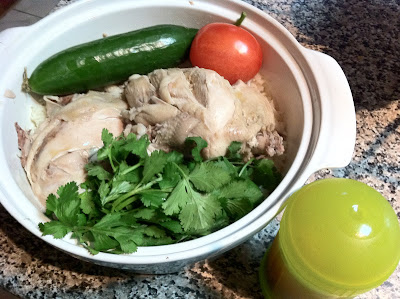 And then they ate so many sausages and marshmallows that they weren't interested in it anyway. Husband has always been rather ambivalent about it. Dad only liked the rice. Mum wouldn't touch 'that kind of thing' in a fit, and besides I made it, so it elicited a curled upper lip. So it was really only me who liked it. 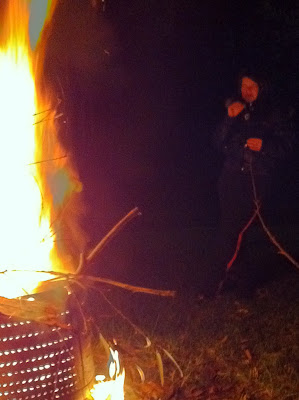 Next time I feel like Hainanes Chicken Rice I will remember that for $7.50 someoene else will bring it to me AND do the washing up. And the rest of the family can bite me.
Posted by Unknown at 2:22 PM

you can make me hainanese chicken any day. also, i would pay you $7.50 at least to see you set fire to something in the kitchen.

ahahahahah... Oh how I can understand every word you wrote ! ..if it makes you feel better you have lots of knit friends that you can cook for and would appreciate your hainanese chicken .D

I'll join the others in eating your Hainanese Chicken rice. I love it. Children can be such ungrateful consumers of good food....

We should meet in the city and lunch at Chat Thai or the Malaya...

This made me giggle, especially setting the recipe on fire - it isn't an episode of Masterchef unless something is set in fire heh heh!

I too would be happy to eat your h.c. rice! And if you like, I will bake something nice for dessert, since I infinitely prefer to bake than cook!

I'm anther Hainanese chicken rice devotee and have just been eating it around Malaysia. Perfect comfort food. In the unlikely event you're ever in Ipoh (tourists about half a dozen a year) go to a restaurant called Hainam. Yum. About $12 for two including a bottle of Tiger beer. I've also, in my past cooking days, made it myself several times. It has to be the most labour-intensive apparently simple dish ever.

this is S.V. favorite dish - and his version of comfort food in our house. I love it too -
I too would be over in a flash when you cook it again

I know now that next time I make chicken rice, I should invite you over. There's always enough for one extra person (or leftovers for the next day!)

I discovered the joys of Hainanese chicken rice earlier this year, impressing the old Chinese lady at my local who told me that "white people never order this". I did have a go at making it myself (adapted a recipe from the NYTimes website) which was quite tasty, but really it's so much easier to just let the experts make it for me! Chicken + rice is my number 1 comfort food.

You know I don't cook, but I'd happily eat your chicken - especially if you set fire to the recipe first. ;)

You did a great job of the Chicken Rice & I am sure it's yummy. I make this dish regularly as my girls love it.

As for the rice, try using Jasmine rice next time :D

I love Chef's choice....and yes it is better and easier to sometimes just get it from the restaurant. The bonfire looks really good.

Ha! I can so relate to your post! Good to know there's a reliable Asian down the road and that one day the fun of cooking will return....

oh well atleast you can say you've made it. i like it now that my kids are older and eat anything. but their favs are baked goodies, esp with anything that has chocolate. they demolished an entire choc mud cake last night.