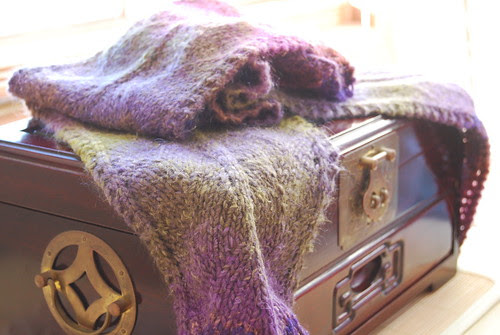 I've started and ripped the edging of the Eats Roots Shoots and Leaves. Seems I can't read a pattern. There's a wrapped stitch in the edging which I completely ignored, so I had to start again after 10 cm or so of edging. Second try wasn't much more successful, I wrapped the wrong stitch, so we're both petulant.

Feeling choked, I began to seek solace in stash. Two balls of silk garden in the most beautiful colours. The antithesis of my lace shawl, I needed something simple and
understated.

I scoured ravelry and the net. Argosy? - too much. Entrelac? - not in the mood, although maybe later.

I let the yarn speak. 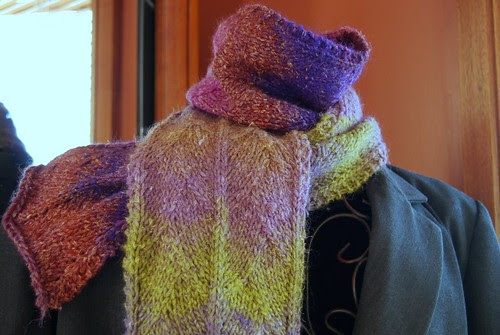 Cast off and press. 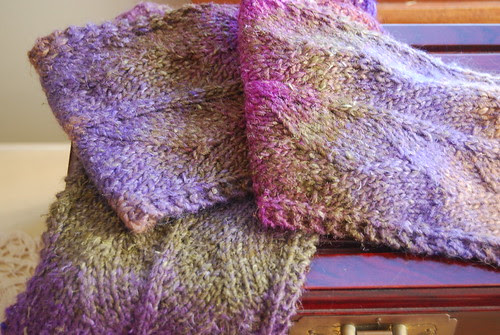 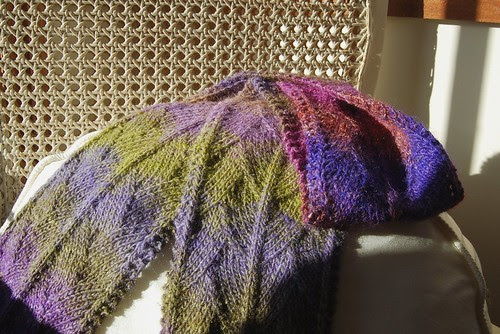 NOTES:
Barbara Walker instructs to M1: pick up the bar between the stitches and knit into the back of it. This twists the new stitch, and makes the increase almost completely invisible.

I found when I did that with this yarn the pattern seemed to disappear somewhat into the knitted fabric, so I just picked up the bar and knitted into the front of it. No twist, so you can see the increases down the centre and sides, and you can also see the subtle relief of the dragon skin pattern.

I think if I were using a smoother yarn I may not have needed to do this, so you can experiment with both techniques and choose the one you like most best. You could even use a yarnover I guess, and get a line of lacey holes. You pick.
Posted by Unknown at 10:03 AM

This is great - the pattern is perfect for this yarn.

Great write up on the Easter show, too, BTW. Someone had to say it.We had similar discussions in Canberra about our show.

can I suggest a teeny weeny thing???

wash it, silk garden is such a different beast when washed, so soft.

Awe I love it, might even attempt a go at it. Thanks for putting the pattern up.

Yes, washing does make the SG very soft- I have a scarf too.
I love the changes of colour and it does suit the pattern perfectly!!!

I'm with rose red - the pattern and the yarn are a perfect fit!

Lovely pattern & the colors are gorgeous - love it. Thanks for the pattern.

You have done it again Knitabulous, and thankyou for writing out the pattern. I always appreciate this as it takes time and effort to share the pattern love, so again a big thanks!

Mmmmmm...I'm not sure whether I'm drawn more to the pattern or the yarn...but the pattern's definitely a keeper! Thanks for sharing!

You're right Rogue! It is cast on 30 stitches.
I have changed the text ..

Actually, I think that "Choke" is a great name for a scarf. Especially the way it came about. The name should say something about how it was conceived.

Example: I have a pattern (that is aparrantly quite popular with the people at the AntiCraft) called "Yarn Vomit."
Screw the rest of the world - name your knits how you want.

Is your edge on the gator scarf part of the pattern you wrote (which I just love BTW) or is it added on at the end?
Thanks,

Finally, I've found THE pattern for my 2 skeins of Silk Garden - thanks a lot ;-)

Hi, I found your blog via a free pattern site. Thanks for sharing the Dragon Skin pattern, I'm making it for my son, his eyes nearly popped out of his head when I mentioned it to him.
Going to link to your blog, from my blog, so my readers can see what a lovely and clever lady you are.
Stay cool and safe.

This pattern looks great! May I ask which color of Silk Garden you used? I can't quite tell which one it is from the pictures, but I really want to make one that looks just like yours. Thanks!

When I knit2 and purl on the wrong side I end up with an increase... IDK what I'm doing wrong.

This is so beautiful! I am going to cast it on later this afternoon, and I think I might try it with a yarn-over and see what happens. I'll let you know! Again, thanks for posting the pattern. :)

Please help a fairly new knitter. What kind of yarn is Silk Garden? Since I buy my yarn in places like Joann's or Hobby Lobby, I am not familiar with yarn store brands. What weight is it? I love this pattern and even though it looks a little above my skill level, I'd love to try it. Can anyone recommend a larger needle size and yarn??
Jeannie in Bethlehem, GA

I looked at Silk Garden yarn and could not tell what you used. I would like the same colors but cannot figure it out. Would you mind sharing what Silk Garden color you used?

Love the pattern. Started it with Madeline Tosh Merino DK in the color way Baltic. Absolutely love it, The pattern and the yarn. Found it via Ravelry. And i learned a new thing or two. Thanks Alex

I loved the book and laugh at how many people aren't interested in punctuation, etc.

The scarf is beautiful! Thank you!

Going 'Anonymous' because AIM isn't working for me.

Where in the pattern is the wrap stitch?

I've searched, to no avail.

Reader above asked about the edging of your scarf (which i love). Is it part of the pattern or added when finished? thxs in advance.

What is the edging around your scarf? Love it. thxs in advance.

I am an editor of AllFreeKnitting and would love to feature your patterns on my site with full credit to you. I know my readers would just love it and in return would generate some nice traffic to your site. If you agree and would like us to feature your project, our readers will simply click the link to your blog to get your full tutorial. It's really that simple.

I see you have lots of other great patterns on your site as well and I would be interested in featuring even more! If you are interested in featuring more projects like this one with links to your site, I can create a nice bio page for you as well as one of my Featured Knitting Designers. This page will include your bio and links to your site as well as any social media you would like to promote.

My site is part of Prime Publishing and we publish 19 cooking and crafting web sites. We have over 3.5 million active e-mail subscribers and about 10 million page views per week. You can learn more about us at www.primecp.com.

Please let me know if you would like to get started. Just a reply to this e-mail is all it takes.

Thanks, and I look forward to hearing from you!

@The last anonymous commentor, I believe that the odd rows are wrong side rows, and you would repeat the first row (k2, p26, k2) on those rows. I'm not the op, but I hope that helps!

Love this pattern! Works great with the Noro Silk Garden...I'm getting ready to start a second one. :-)

I'm happy to find this lovely pattern posted by another Ailsa!
from Ailsa in Raleigh NC

Hi ! I love your Dragon Skin Scarf! I'm anxious to try it. I used to knit years ago, but for the life of me I can't figure out what SSK means. Please help!

how beautiful. what weight is your yarn? we do not have silk garden available to us and would like to try a different yarn. am wondering if you used 4mm (US 6) this might be a sport weight or #3 yarn?? thanks so much.

Hi
I've just started a wee knitting blog.
Please can I link you in. I really love this pattern & want to give it a go.
www.knitwithsmileylil.blogspot.co.uk

I would be interested to know why you have a place for comments/questions, but never EVER apparently respond to them? I was seriously going to try this - but I see that no question will be answered, so......... guess not.

A powerful share, I simply given this onto a colleague who was doing slightly evaluation on this. And he in actual fact purchased me breakfast as a result of I found it for him.. smile. So let me reword that: Thnx for the treat! However yeah Thnkx for spending the time to discuss this, I feel strongly about it and love studying extra on this topic. If attainable, as you grow to be expertise, would you mind updating your blog with extra particulars? It's highly useful for me. Large thumb up for this weblog submit! casino slots

what is M1 and what is a bar. Little more help please. How do you know which is the wrong side?

No sure what SSK means??

I hope someone has already answered this. It means slip, slip, knit. You slip two stitches from left needle to right needle and THEN knit them. Go to google or YouTube and look for SSK.