The devil's in the detail

I am so proud of myself today I feel like I invented knitting. I don't even have time to be doing this post, I've got a million things to do tonight and no time. The kids aren't even in bed and it's 10 o'clock - which is unheard of round here.

In complete contrast to the Frost Flowers and Leaves, which was torture right from the second repeat of the central pattern (of seven repeats total), this one didn't get painful until there were 1200 or so stitches on the needle, and by then it was so close to the end the excitement kind of drove it home.

This project was more knitting, but it felt like less.

I love that I said I'd do it for November, as part of the summer of lace knitalong and I did it. So, Bells I have to thank you for that. Because I always really try to do what I say I'm going to do, and if I set myself a deadline I stick to it. That's why I rarely set myself deadlines. I think it comes from a long career as an accountant - when you have a deadline it's a deadline. But if it wasn't for your summer of lace, I wouldn't have been so hard on myself, and I'm glad I did. 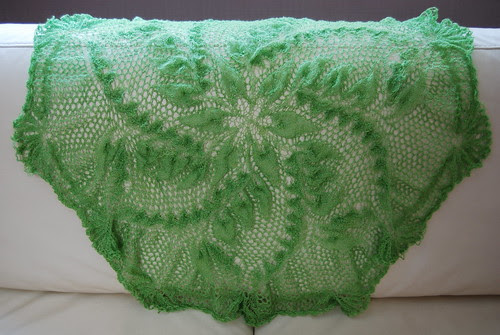 Not only do I love that I finished it, I love how it looks, even unblocked.

I love how I blocked it, using a mix of pin aversion and the laws of physics. 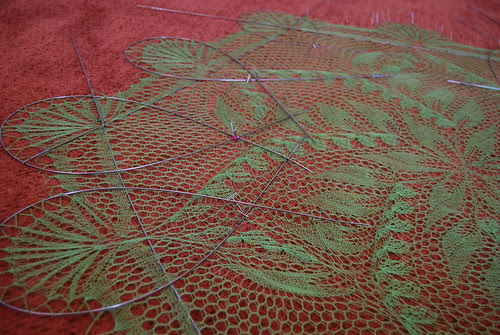 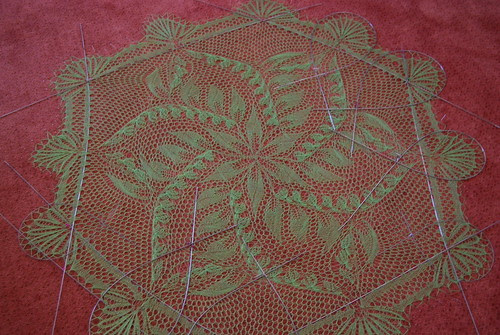 I don't love how I photographed it. It just hasn't captured the ethereal lightness of it at all. Just to give you an idea, it's honest to god cobweb weight yarn (thinner than sewing thread) on 2.25mm needles. Each one of those little leaves arching down from the centre is the size of my pinky fingernail. It's like a whisper of a thing, hardly any weight at all. 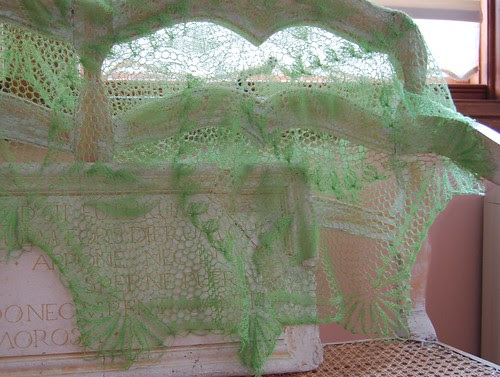 I will try again with the photos tomorrow, and post proper project notes. In the meantime, I'll just take pictures of it in different rooms. 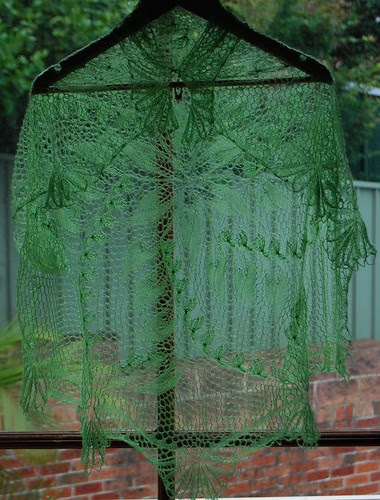 Oh man. You bask all you freaking want. Go right ahead.

I just found my feature piece for this week's lacy round up. Well done ailsa. It's stunning - and I'll look foward to seeing more phtos of it.

Oh god, I want to write something, but I'm speechless!

How do you do it? It is fabulous.

How beautiful. And I'm in awe of your laws of physics blocking. So ingenious. Are you coming to SSK again sometime so we can see it in real life and real scale?

What a wondrous piece of art really. Not only is it beautiful, but it is green, whch makes it a hundred times better!! I love your blocking, it looks like Howard Hughes' work!!

Wow looks wonderful, and I love that colour! Very retro!

Wow, that is amazing!! And I am totally in love with your mad blocking skillz. And all in a month - wow. Just wow.

Breathtaking. I love it. I want to be the kind of knitter you are.

*attempts to retrieve jaw from the ground and fails. miserably.*

ahhh - so that what you do with the little wires? Always wondered. Looks so lovely.

Wow!!! I love the green. Love the pattern!! Love the lacework!!! And the way you blocked it?? I've never seen anyone blocked like that before!!! Are you some sort of a knitting guru?? ^_^

Gorgeous! What a great piece of lateral thinking to use all those circulars!

It's beautiful, and so is your blocking. Can't wait to see the finished object in 'person'

oh dear lord, that is MAGNIFICENT!

I bow down before you, you are the Queen of Lace :)

I put up a comment yesterday - but it isn't here!

This is truly wonderful! As someone said, absolutely knitabulous.

Oh, that is so beautiful. I love the color, I love the pattern. Simply gorgeous! Well done.

Wow - it's really .... beautiful! Your blocking tehnique looks so complicated but you have done a great job!

Oh my. Amazing and the lightness is very much in your images.

Glorious knitting and your blocking is sheer genius.

I've deliberately not read the other comments...That is the most amazing lace I have ever seen, the green is gorgeous and it has such an aura of cobwebby lightness. You deserve way more than a pat on the back for this piece of art. Congratulations.

Saw on Ravelry and HAD to come read about it. This is just outstanding. SO glad you enjoyed it so much so that the knitting equaled the beauty of the piece. Lovely, lovely. Now I'll go hunt around and see some of your other things.

Whoa! That may be the most knitabulous thing I've ever seen in my whole life. I had to come over from Bells and say so. WOW.